Louis Braille and the braille alphabet

Developed in the 19th century, Braille is a writing system used by people with visual impairments. 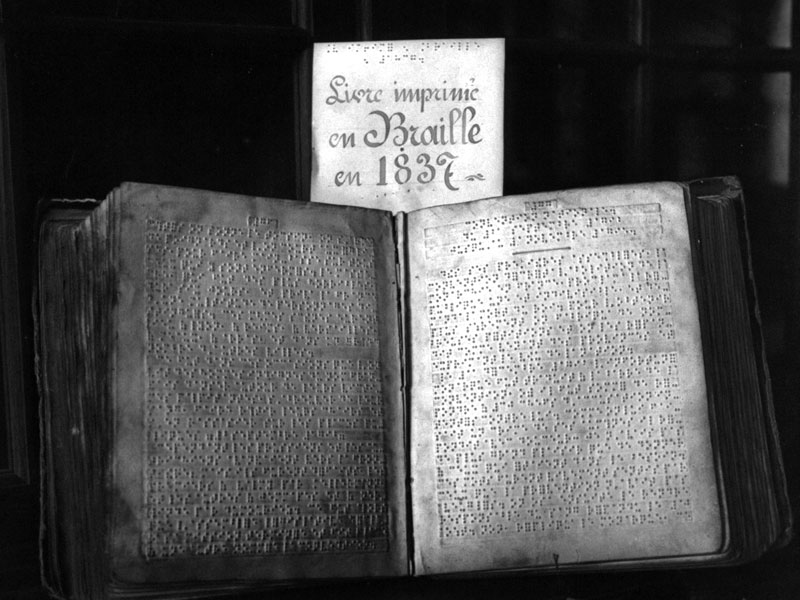 Named after its creator Frenchman Louis Braille, who lost his sight in a childhood accident, braille is read by touch, with raised dots embossed on paper.

Louis Braille first unveiled his writing system in 1824, and revised it in 1837. Although not universally adopted during his life, it has been in use since, and has been adapted for languages worldwide.

Braille has been an important tool in the education and employment for those with visual impairments. This blog explores a number of objects relating to braille found in museums, libraries and archives' collections across Europe.

Both the photographs above and below are from the National Library of France. The photograph above shows a book written in braille from 1837, and the photograph below shows a sculpture bust of Louis Braille.

This photograph, from the National Archives of Catalonia, shows students learning to read braille in a classroom of Casal de Cegues Pi i Margall, in Barcelona.

This brass tool, from the Tekniska museet in Stockholm, was used for embossing braille into documents.

This typewriter-like apparatus, from Sörmlands museum's collection, created documents in braille. The typewriter was manufactured in West Germany, during the post-war period when the country was occupied by Great Britain, the United States, France and the Soviet Union. The text 'Made in the US zone of Germany' is printed on the device, meaning it likely dates to the late 1940s.

This is the Standard Perkins Brailler, from the Norwegian Technical Museum's collections. It was designed by David Abraham for Perkins School for the Blind in 1951, it continues to be used worldwide. It embosses 25 lines with 42 cells on a 11" x 11 1/2" sheet of paper.

EXPLORE MORE history of written communication in blog 'From quills to typewriters: how the industrial revolution changed our writing culture'

This pamphlet, part of the Sörmlands museum collections, is from a nursing school in Eskilstuna, Sweden and shows how to denote numbers and punctuation marks in braille.

This binder of maps, from the Skåne region medical history collections, features braille and raised maps allowing blind people to read them. More detailed photographs can be found here.

This booklet, from the Skåne region medical history collections, was published by The Royal National Institute for the Blind in 1959. It was a supplement to a Braille Music Catalogue. As well as numbers and letters, braille also includes music notes and symbols.