A lost World War One memorial plaque - dedicated to fireman Thomas McGarry who died in the sinking of the HMS Laurentic in 1917 - has been returned to his family decades later thanks to Europeana 1914-1918.

Thomas McGarry was a fireman on board the HMS Laurentic which sunk while travelling from Ireland to Canada when it struck two mines off the coast of Donegal on 25 January 1917. McGarry was among the 354 passengers and crew who died in the sinking of the ship.

Decades later, a bronze memorial plaque bearing Thomas McGarry's name was dug up in a garden by Tom Murphy, an Irish champion pole-vaulter, in Limerick.

Memorial plaques (also known as a Dead Man’s Penny or a Widow’s Penny) were issued to the next-of-kin of all service personnel who were killed in World War One. In 2013, Killian Downing, Tom Murphy's grandson, researched the plaque and shared the story on Europeana 1914-1918, our digital archive for World War One stories and items. 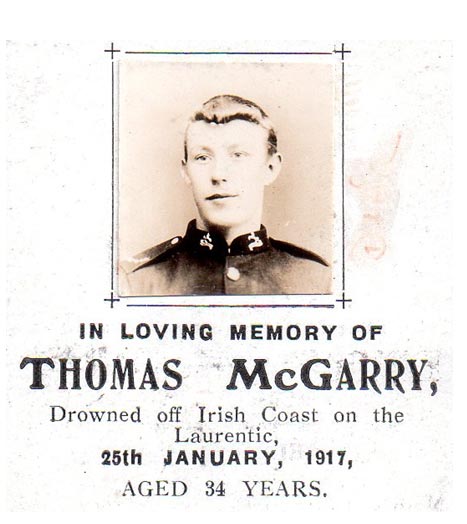 Thomas McGarry's grandchildren - now based in Ireland, the UK and Australia - discovered the story. They contacted Killian, who was able to return the plaque to them last weekend, just days away from the centenary of the ship's sinking.

Thomas McGarry's body was never recovered after the sinking, so the return of this plaque to his descendants is very meaningful and tangible for them.

Killian Downing says, 'After having the pleasure of meeting this family, to return the memorial plaque of their grandfather, I really understood the importance of sharing and discovering archives and their stories online. The Europeana 1914-1918 project allowed me to do this, and I hope it continues!'

An exhibition dedicated to the Laurentic will be held at the Tower Museum in Derry on 25 January, to be accompanied by a series of local events and commemoration services held in both Donegal cemeteries. Items recovered from the shipwreck during many dives will be on public show during the exhibition.