Félix Arturo Lope de Vega y Carpio was born 25 November 1562 and died on 27 August 1635. He was a terrifically prolific writer and one of the best dramatists and lyric poets of the Spanish Golden Century of Baroque Literature. His plays are still being performed today. In his time, he penned some 3,000 sonnets, 3 novels, 4 novellas, 9 epic poems, and about 1,800 plays. Examples of some of his most famous plays are El acero de Madrid (The Steel of Madrid), El perro del Hortelano (The Gardener's Dog), and La viuda valenciana (The widow from Valencia). 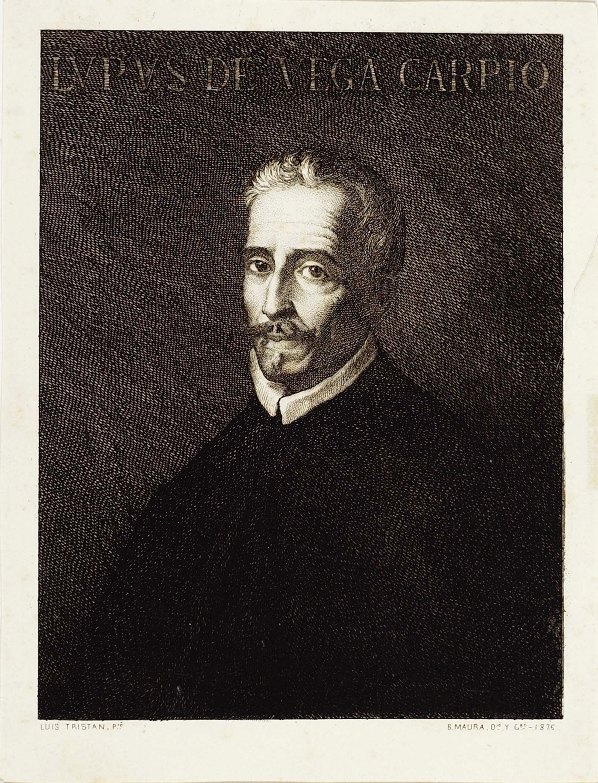 With such a large amount of work being generated, de Vega would have to be something pretty special for them all to be great - many people thought he concentrated too much on quantity and not enough on quality. He wrote to order,  with many of his plays going from pen to stage within just 24 hours. Despite this haste, at least 80 of his plays are thought of as masterpieces. De Vega wrote his first play aged 12 and went on to study at university. He shaped Spanish theatre, establishing the three act comedia as the definitive Spanish theatrical form. In spite of his university education, he resisted the classical form of language, and instead championed the language of ordinary life saying 'Let us then speak to him in the language of fools, since it is he who pays us.'

De Vega was a pioneer. His work doesn't conform to the standard categories such as comedy and tragedy, it is more concerned with the drama of intrigue - cloak and dagger tales of love and honour amongst the nobility. For de Vega, the plot was the most important element of a play. And speaking of plot, he had plenty of inspiration from his own eventful and dramatic life, which included a stint in the navy and a love affair with an actress that ended in a stint in jail for libel and banishment from the court. If that wasn't enough excitement, de Vega went into exile, married a 16-year-old, and took part in the Spanish armada. A veritable ladies man, after his wife died in childbirth, de Vega remarried and continued to have affairs despite finding religion and joining the priesthood.

The final year of his life was a tragic one; his son died in a shipwreck and his daughter was abducted. In the same year, de Vega himself died of scarlet fever. Despite having been written 400 years ago, de Vega's plays are still being produced today. These pictures show a series of photographs from a 1955 production of The Gardener's Dog in Paris; a 1963 Hungarian set design called 'The Crafty Bride'; a theatre poster for a 1917 production by 'Teatro Lope de Vega'; and a poster for a 1958 production of The Gardener's Dog at József Attila Theatre; Budapest.