Letters from Indian Soldiers in France, 1916

The British Library's India Office Records hold the Reports of the Censor of Indian Mails in France, 1914-1918. The Censor was concerned with letters to and from Indian troops serving in France and Mesopotamia, and his reports include translated extracts from soldiers’ letters. The Government feared that uncensored letters might provide military information to the enemy and that accounts of Indian soldiers suffering in France could distress their families at home, and so lead to political instability in India.

There was also a desire to prevent seditious material reaching the troops. The letters in this series passed through several layers of interpretation. As many Indian soldiers were illiterate, scribes took down the letter on the sender's behalf. The letters were then censored at the Regimental level in order to remove military information. Lastly the letters were censored by the Censor's Office, based for most of the War in Boulogne. The chief purpose of this Office was not to suppress letters, but to gather information about the morale of the soldiers. The Head Censor would prepare regular reports for the information of Government and the Army, and to which would be appended the translated extracts.

Bound in 27 volumes, the letters describe vividly the experiences of the Indian soldiers, and their longing to return to their families back in India. The letter from Daya Ram of the 2nd Lancers (British Library reference: IOR/L/MIL/5/826/6 f.876), dated 5 July 1916, describes the conditions the Indian troops lived in, with the sounds of battle all around, day and night, and the discomfort they suffered living in the trenches. Despite this, Daya Ram still notes how ‘splendidly built’ the dug-outs were, with wire beds and room enough to contain ‘many men at once’. 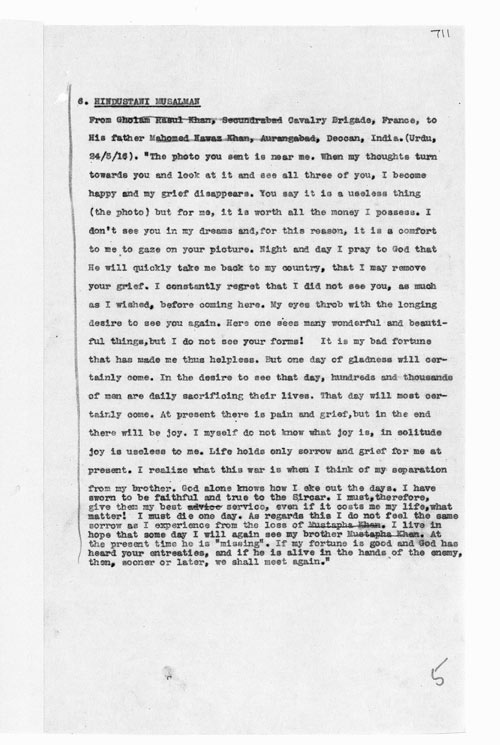 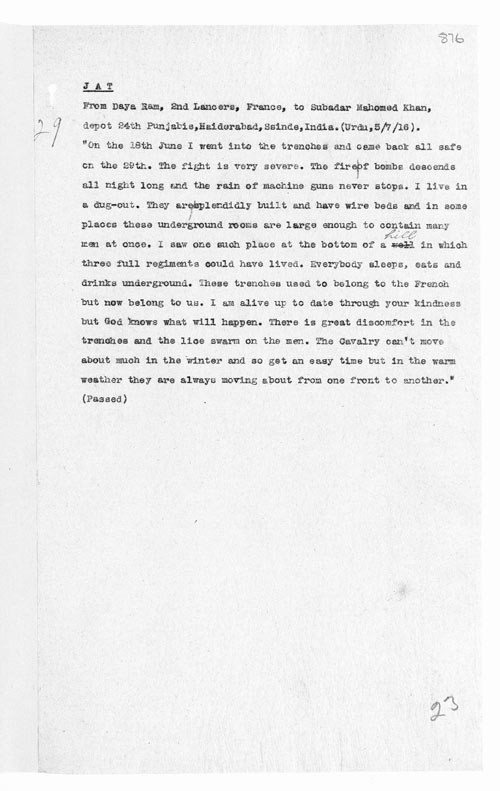 Being so far from India, and living in what must have seemed a very alien environment, many Indian soldiers naturally felt an acute longing for home and family. The letter written by Gholam Rasul Khan of the Secunderbad Cavalry Brigade, on the 24th May 1916, to his father in Bihar, is a poignant example of this (British Library reference: IOR/L/MIL/5/826/5 f.711). In the letter he says that a photo of the family is his most valuable possession, as it gives him comfort to look at it. Tellingly he comments that it is in the desire to see home and family that “…hundreds and thousands of men are daily sacrificing their lives”. Gholam’s mood in the letter swings between hoping for that day and despairing that he will not live to see it.