‘In the Album of a Girl’

A Dutch Poet Laureate writes in an album amicorum

How would you like having a poem composed especially for your friendship album? This is what happened to Elizabeth Adriana Staats (1823-1896). 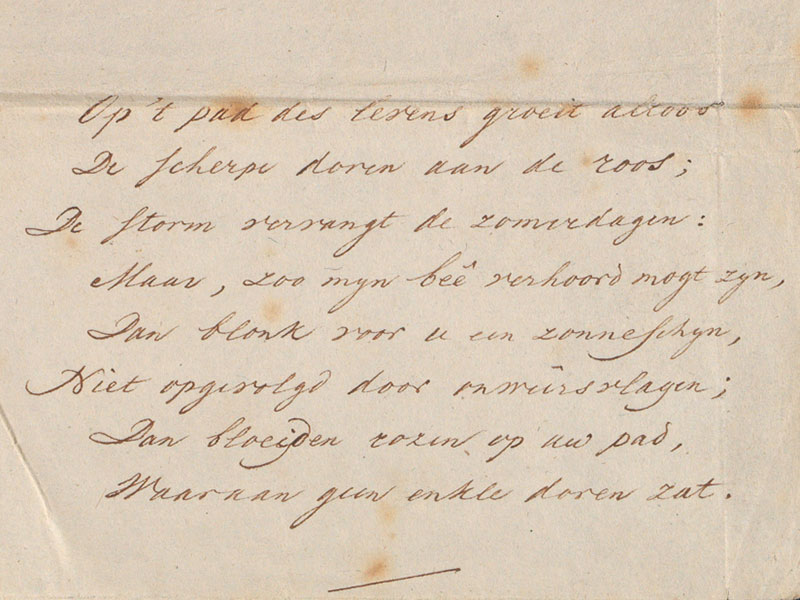 It is 1841 and Hendrik Tollens (1780-1856) is a celebrated poet in the Netherlands. One of his poems has been chosen to be the national anthem and his poetry collections are purchased by many. So what does a poem of the Poet Laureate do in the album amicorum of the 18-year-old Elizabeth Adriana Staats from Rotterdam?

The poem, entitled ‘In the Album of a Girl', is written on a folded sheet that is kept in the album between two pages. The poem is not signed or dated by Hendrik Tollens but a short note at the bottom of the page gives us clarity about its origin:

'The above-mentioned verse written by hand, by the Dutch poet Tollens, and handed to the Pharmacist J. Bulterman, at his request, to be placed in the album of his girlfriend, this being a favour in return, for a white-lead analysis in 1841. J. Bulterman'

The pharmacist Jesaia Bulterman (1810-1866) was Elizabeth's fiancé. Jesaia tells us that the poem is a return service for an analysis of the pigment white-lead, a very popular pigment among artists. But why does the famous poet Tollens need a white-lead analysis? That is because Tollens was not only a poet but also an entrepreneur in the paint trade. He was the owner of the paint and varnish factory Verf- en Vernis fabrieken Tollens & Co in Rotterdam. That Tollens went to Jesaia Bulterman for an analysis of white-lead is not so peculiar: it was common for pharmacists in the 19th century to have a side-business in paints.

It is possible that Tollens was a regular customer of Bulterman’s pharmacy, or that during one sole visit Jesaia convinced Tollens to write a poem for his girlfriend’s album amicorum.

In an album amicorum, a booklet in which the owner collects contributions such as poems and illustrations from family, friends and acquaintances, you can find many kinds of texts. In the 16th century, for example, it was common among students to write scholarly quotations in Latin in these friendship albums. In the 19th century, Dutch alba amicorum were filled with quotes from poems by the popular poets of that time: Willem Bilderdijk, Rhijnvis Feith, Hieronymus van Alphen and Hendrik Tollens.

Poetry was very popular in the 19th century. It was the period of Romanticism and nationalism. After the French occupation of 1810-1813 the regent Willem I was crowned King of the United Kingdom of the Netherlands and there was a need for peace in the new nation. Poetry about God, the fatherland and family values were popular among the population. It also helped book sales that poets were idolized as celebrities.

19th-century alba amicorum of young, unmarried women are filled with poems with titles such as: ‘Hommage and Virtue’, ‘Hymn to Heaven’ and ‘My Homeland’.

These poems were usually written down by family or friends, but a poem personally written by a celebrated contemporary poet in an album amicorum is unique! Especially one written by the Poet Laureate Hendrik Tollens in the album of Elizabeth Adriana Staats from Rotterdam.

Hendrik Tollens writes in this poem: ‘But if my prayers are heard, then the sun is shining for you […] roses without thorns bloom on your path.’ Unfortunately Tollens’ wish for Elizabeth did not come true. The life of Elizabeth and Jesaia was covered with thorny roses: they lost two of their children, a girl of 7 and a boy of 16, in quick succession.

Featured image:
Poem of Hendrik Tollens in the album amicorum of E.A. Staats with the note of J. Bulterman at the bottom of the page, 1841. National Library of Netherlands, public domain