How are vinyl records made?

Discover the chemistry behind records

In the French cult film "Amélie" the young heroine imagines how a record is created: like making a crepe, you pour a liquid substance onto a hot, circular surface and smooth out the "batter" of the record with a wooden stick. Finally you apply the paper label firmly in the middle. And the record is ready.

In reality, however, records are pressed and not poured. In the cutting studio the soundtrack is cut into the master foil (the so-called "mastering" process). The master foil, or acetate, is then silvered and electrochemically coated with a thin layer of metal (galvanised). In the last major step, the foil and metal layer are separated and the latter is used as a negative mould.

Roughly 1,000 records can be pressed from it. Since the foil is no longer suitable for use after being deployed to make the first mould, the mould itself is then used to create further moulds. The negative moulds are also known as matrices. Before the pressing process, the matrices must be centred and the edges trimmed before being clamped in the press. The so-called vinyl cake is then mounted for the production of a vinyl record. The cake is produced shortly before the pressing process.

Polyvinyl chloride (PVC) granulate is heated to 160 degrees Celsius at which point it enters a viscous state and can be shaped into small vinyl cakes and placed in the press. The cakes weigh around 160 grams. The mould is heated to 180 degrees Celsius when the firm vinyl liquefies. A pressure of 110 tonnes is applied to press the cake into a vinyl gramophone record. It is then cooled with water. This production step takes about half a minute. These and other facts and figures are taken from the following video. The temperatures and pressures may vary depending on the pressing system.

The paper labels are applied to both sides of the blank during the pressing process. They are so firmly attached to the vinyl after the pressing that they cannot be removed without causing damage. The fact that records are usually black is due to the addition of carbon black colourant. PVC itself, however, is transparent, meaning that other colours can be added or it can be left transparent. This results in different consistencies, and the pressing process needs to be adapted accordingly. 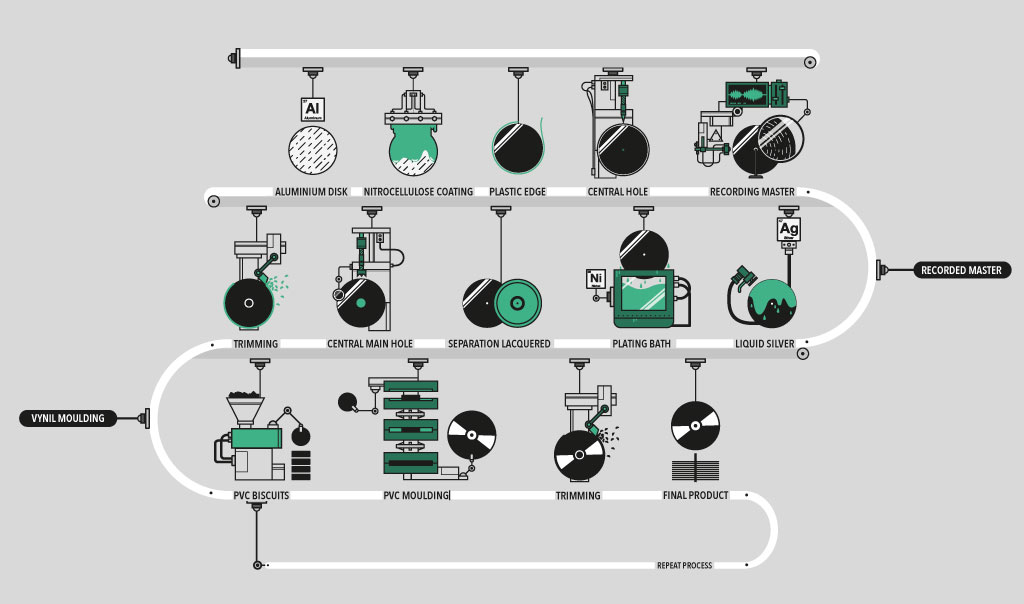 This image has been created during "DensityDesign Integrated Course Final Synthesis Studio" at Polytechnic University of Milan, organised by DensityDesign Research Lab in 2015.

The final step in the production of vinyl records is trimming. Once the cake has been pressed, the protruding rim of the vinyl disc is trimmed. This operation is carried out while the vinyl is still warm; the disc is then left to cool. LP (long-playing) records with a playing time of 20 to 25 minutes per record side have a standard diameter of 12 inches and weigh 140g on average. The trimmed edge can be melted back down and used for further pressings. These days we continue the lifespan of vinyl by digitising them. Find them in Europeana.

This blog first appeared on the Europeana Sounds blog. Here you can also find it translated in German.