Heroes of their time: 5 firsts in Eurovision Song Contest history

Published May 14, 2020 by
Europeana Foundation

The Eurovision Song Contest has been entertaining audiences across Europe for more than 60 years.

The first Eurovision Song Contest was held in 1956. Since then, much has changed: many more countries taking part, new rules, new voting systems, bigger stages and more shows with two semi-finals.

This blog looks at some Eurovision Song Contest firsts, with stories from across the decades Eurovision has taken place.

And while the Contest has been cancelled for the first time ever in 2020, we hope this blog helps you relive and enjoy Eurovision memories.

Dutch singer Jetty Paerl was the first singer on stage at the Eurovision Song Contest. When she stepped onto the stage, she probably didn't know the history she was making.

The Eurovision Song Contest in 1956 was a much smaller event than it is now. It was mainly a show for radio, though was filmed for those who owned televisions. Only 7 countries took part, compared to more than 40 these days.

The Contest had come about as a way to improve and showcase new radio and telecommunications technologies. Inspired by the Italian San Remo song competition, the idea was that friendly competition between countries, broadcasters and artists would help to heal wounds and bring together a continent that just over a decade previously had been torn apart by war.

That war had played a large role in Jetty Paerl's life.

Born in 1921 in Amsterdam, by 1956, she was a popular singer. At the outbreak of World War II, she escaped to the United Kingdom where she volunteered with the Dutch army’s Voluntary Women's Auxiliary Corps.

In London, she became involved with Radio Oranje, which broadcast news and entertainment shows from London to the Netherlands, then occupied by Nazi Germany. After the war, it emerged that many of her Jewish family in Amsterdam had not survived the war.

During her wartime broadcasts, she became known as Jetty from Radio Oranje, a name that stayed with her into the 1950s when she performed regularly on the radio.

In 1956, each country sent two songs to the Contest. The singer of the second tune from the Netherlands was Corry Brokken. The following year, she went on to win the Contest, held in Frankfurt, with the song Net Als Toen.

Another difference with the 1956 Eurovision is that we only know the winner - the other positions were not announced. Switzerland took the prize, the song Refrain was sung by Lys Assia - the first Eurovision winner.

Two singers from the Netherlands - who were due to host the 2020 Eurovision Song Contest in Rotterdam - were the first Asian and Black performers in Eurovision.

Dutch singer Anneke Grönloh was the first Asian performer to take part in the Contest. Grönloh, who was born in Indonesia, moved to the Netherlands with her family after World War II. Her singing career started in the late 1950s, having won a talent competition.

She represented the Netherlands in the 1964 Eurovision Song Contest. Her song Jij bent mijn leven (You are my life) placed joint 10th with the Belgian entry.

Born in 1933 in the Netherlands with Surinamese heritage, by the 1960s Scott had built a successful jazz career. In 1965, she had her own TV show which led to her taking part in Eurovision the following year.

She took part in the 1966 Contest in Luxembourg with her song Fernando en Filippo which placed 15th (out of 18 entries).

Today, Eurovision is known for being celebrated by LGBTQ audiences. Through the 2000s and beyond, an increasing number of drag performers took part in Eurovision (including Slovenia in 2002, Denmark in 2007) with Conchita Wurst winning the Contest in 2014.

But this was not always the case. The first drag performer on stage in Eurovision was in 1986. Jonny Nymoen, a performer from the troupe 'Great Garlic Girls', was a backing dancer for Norway’s entry Romeo sung by Ketil Stokkan. 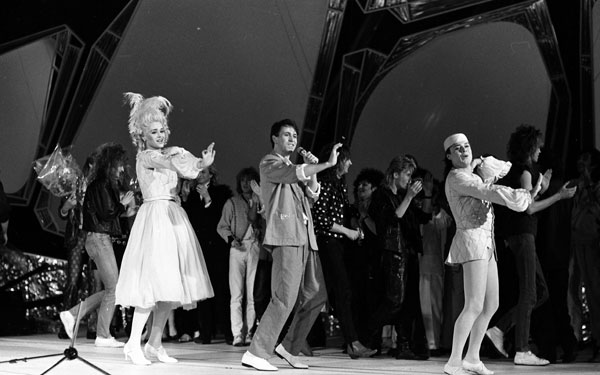 Following Ireland’s win in 1992, Eurovision came to a small town in County Cork called Millstreet. Millstreet’s population was around 1,500 making it the smallest town or city to host Eurovision, which was held in an equestrian arena.

The outside broadcast for this show was a massive undertaking - with Notaro at the helm. This news report shows some behind-the-scenes footage, including an interview with Notaro.

Eurovision Comes to Millstreet, RTE, In copyright via EUscreen

In the report, she mentions her two nightmares - something going wrong in the voting and Ireland winning again. Spoiler: Ireland did win again in 1993, and again in 1994 - the first (and, to date, only) time a country won the Contest three times in a row.

EXPLORE MORE: Films from behind-the-scenes at the Eurovision Song Contest in our blog.