Happy birthday to the British Museum

255 years ago today, the British Museum opened its doors

255 years ago today, the British Museum opened its doors. It was the first ever national public museum. As a public museum, it was free to all and aimed to attract 'all studious and curious persons'. Today, it's stronger than ever, having just announced record visitor figures! 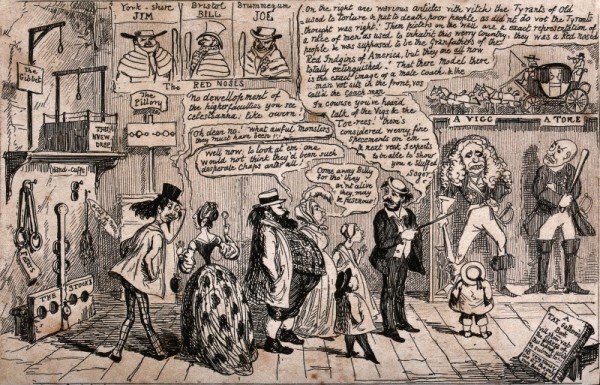 Studious and curious persons study specimens at the British Museum in this George Cruickshank caricature. The guide tells the visitors that the pictures of men on the wall - Yorkshire Jim, Bristol Bill and Brummegan (Birmingham) Joe - are examples of a race of men all now extinguished!

You can find over 8,000 items relating to the British Museum in Europeana. The museum hasn't always been housed in the iconic columned building we recognise today. To begin with, it was in a mansion called Montagu House - on the site of the existing museum. But this soon became too small. For many years during the 1800s and early 1900s, construction work was carried out to demolish the existing buildings, along with many houses surrounding them, in order to build new wings and galleries. The result is the neo-classical British Museum as we now know it.

Did you know that Buckingham House (now Buckingham Palace) was considered as a plot for the British Museum? But it was rejected for being too expensive and in an unsuitable location! Did you also know that the British Library - one of the world's two biggest libraries - has only been in existence since 1973? Before that, it was part of the British Museum. Why not take a virtual tour through the British Museum's galleries as they were in the 19th century with this series of wood engravings? See which rooms you can spot on this plan of the ground floor and listen to this recording from the Great Court in 2010.  It's almost like being there!