Agriculture lies at the heart of social developments all over the world. Farming has transformed the lives of farmers, and also people and nature worldwide. 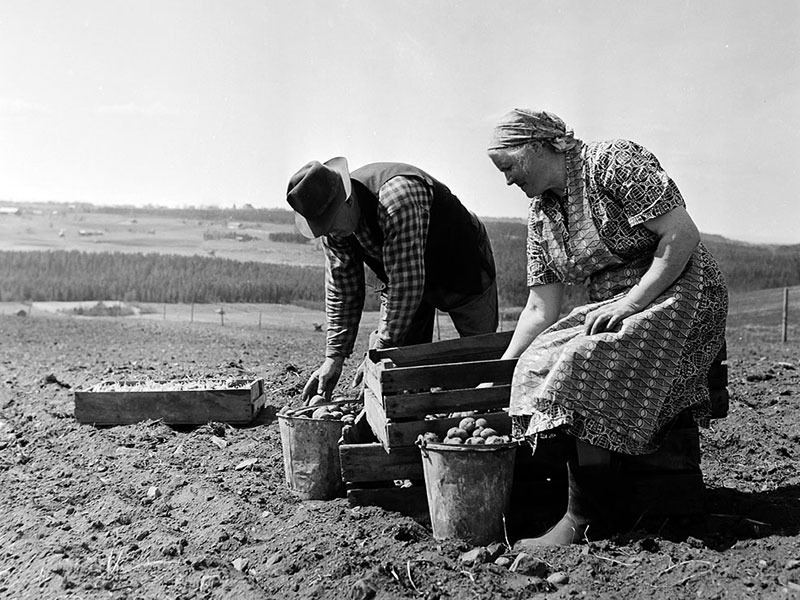 Focusing on Scandinavia as an example, this blog explores the drastic changes in people’s everyday working lives related to the agrarian revolution in the 19th and 20th century.

In 1870, two thirds of Swedes were working in agriculture and living in rural areas. Subsistence and small-scale farming, together with part-time work in fishing and forestry, were the most common practices. This satisfied families’ basic needs, ideally giving them goods to barter or trade locally for everything else they needed.

Everyday life depended heavily on seasons. Droughts or long winters could diminish a harvest or result in not having enough food for both animals and people.

From the 18th century onwards, land reforms (skiftet in Swedish) were one of the first major changes in Scandinavia.

In Scania (a region in southern Sweden) people lived together in villages. Every family owned different patches of land distributed over the area. Based on a principle of fairness, everyone owned both more and less fertile land.

But with growing populations, this system was less and less able to provide enough food. Overuse of the land was a consequence. Thus, politicians and landowners decided to distribute farmland differently.

Farming families now lived on and owned connected pieces of land, transforming former village structures. These reforms led to an increase in productivity, and consequently in wealth and population growth. New crops and plants such as the potato, imported from America, also had an impact.

In Norway, another system was common in the 19th century: tenant farming, where tenants rented buildings and soils from the farmer.

Bad harvests in the 1830s forced people to leave their farmsteads or emigrate. Especially for single young women, moving to cities also meant the dream of escaping the harsh conditions of agriculture. This lead to half of all Swedish women employed in agriculture leaving the sector between 1890 and 1940.

Through the 19th and half of the 20th century, farm work was mostly manual labour, with animals playing an important role.

Horses for example were needed to cultivate fields or pull wood in forests. They also were essential for local trade and transportation. Agricultural practices also shaped domesticated animals - horses such as the Norwegian Dølahest were especially bred for heavy farmwork.

Some of the fastest changes in agriculture took place in Scandinavia in the 20th century, with three factors playing a significant role in this development.

Political programs were set up to support people in owning their own small farms, reacting to the large emigration waves that harmed the countries’ workforce.

Innovations made these small farms profitable: at the turn of the century, artificial fertilisers and pesticides were invented that allowed for cultivation on formerly poor soils. Mechanisation with steam engines and tractors started to transform work.

Stories from two families, preserved by Maihaugen and Skansen, show how life on these small farms were transformed.

The Åkesson family in Skåne

In the early 20th century, manual labour was a common feature of the Swedish Åkesson family’s life.

Bengta and Per lived with their two sons at Skånegården, a farmstead built during the 18th and 19th century. The Åkessons did not pursue subsistence farming - they delivered the primary products for a growing urban population.

Through innovations in breeding and cultivation, they made good profits by growing sugar beet and keeping some pigs and cows. This coincided with a growing demand for sugar, wheat, milk and butter.

Although Bengta still had to harvest the heavy sugar beet by hand with a knife like the one above, they were able to use machines such as early reapers or seed drills. Those were still drawn by horses - tractors were not common in Scandinavia until the 1950s.

After World War I, the Åkessons had to sell the farm. Within ten years, it had become too small to earn a living.  Innovations in machinery and growing dependencies on selling goods at market prices affected their ability to make a living from the farm.

Afterwards, their land was united with the neighbours’ farm, a sign of the more rationalised and mechanised agriculture.

The Morken family in Lillehammer

The Morken family in Norway offers another typical 20th century story for _småbruk (_small-scale farming in Norwegian and Swedish).

After World War I, they benefited from new settlements intended to limit Norwegian emigration. With state funding and an interest-free bank loan, Karen and Anton built a simple farmhouse and a barn, based on standardised architectural plans.

At first, they only used the kitchen and a small ground-floor room, where the couple slept together with their son. Instead of using the second floor themselves, they rented it out as a leisure home. It was not until World War II that their farmstead got connected to electricity; running water and a sink were installed in 1948.

The Morkens had several animals on their farm - a horse, ten cows and three calves, five sheep and a pig.

As their small farm did not make enough profit to earn the family’s living, Anton additionally drove local children to school. Other men worked in the forest industry or road-building. Women usually baked or sewed for others and picked berries for an additional income.

In the second half of the 20th century, agriculture went on to change profoundly.

Tractors became common tools on every farm in Scandinavia. Mechanisation, automation, fertilisers and pesticides enabled intensive farming in Scandinavia, as well as many regions across the world.

The amount of farms decreased, while the farms grew larger. Rationalised planting, growing and harvesting led to fewer farmers managing much more land. Machines could now fulfill the tasks that many seasonal workers and family members used to do.

With less people needed in forestry and on farms, villages that formerly flourished became deserted as urban industries became the major way to earn a living in 1950s and 1960s Europe.

With the aim to maximize profits, European agriculture has profoundly changed in few centuries to feed more and more people with growing demands - often at the cost of environment and biodiversity.

Did you or your family work in farming or agriculture, in Scandinavia or elsewhere? Share your story and help us tell the story of Europe through our working lives in the past and the present.