Dive into Europeana to listen to the sea

The CNRS preserves and disseminates field investigations materials produced by researchers in humanities and social sciences. We made a curated selection from collections recordings on fishing or littoral zones issues related to music and singing.

The collections Sea songs from Val Germanasca, Italy and Various Versions of "La batelière" present a particular example of the "sea songs" collected far from the shore.

As the fossils in the mountains are witness of the past geological eras and the ancient presence of the sea, in the same way men and women of these regions retain today some of the maritime presence that they have experienced in their history.

Thus, the story of the old captain who was too old to travel (Adieu mon beau navire au grand mât pavoisé), or the supplication to Neptune, sent by the sailors to the god of the sea to escape the shipwreck (Chants des gens de la mer), are sung here by mountain dwellers, a time emigrated to a more hospitable coast, then returned to their family in Piedmont.

The linguistic analysis of these songs also demonstrates the strong attachment that people living in the valley had to French language. They inherited it from French origin Waldensian communities as resulting from links forged over generations with neighbouring French regions.

These communities give great importance to reading, to the written text and learning the Bible. This is a determining factor that has made possible preservation and transmission of richly sung repertoires. Most people preserve a songbook inherited from their parents. They keep referring to it, even if they know by heart the song they are going to sing....

You can listen to a Berceuse that deals with a mother's fears for her son. Her husband is a fisherman and she is afraid her baby will one day become a sailor, and never come back home. The different versions of the song "la Batelière", still show a deep rooting of these themes in family life.

The CNRS holds many other archives, where the sea is a significant part of everyday life but also of the imagination of the witnesses. The CREM's ethnomusicologists allow us to listen to music, tales, stories coming from different parts of the world and from various times.

Among them, we can listen to a popular fisherman song that was collected during the universal exhibition of Paris in 1900 or a siberian song, Air Traditionnel Des Hommes Nénetz, as well as the Danse des pêcheurs recorded during a field research in Indonesia or the Chant de pêcheurs. Puxada de xaréu from Brazil.

Finally, there are several recordings of sea soundscapes and marine animals. As far as the latter is concerned, CRESSON's sound recordings are also available in Europeana. The Grenoble centre dedicates its research to sound space and the urban environment and keeps several recordings related to the sea. It is up to you to interrogate the archives to listen to the sounds of the sea which are kept there, as one could listen to the ocean murmur in a seashell... 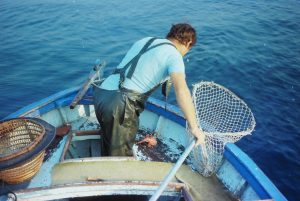