Frédéric François Chopin, Polish composer and pianist, was born on 22 February 1810. Chopin is considered one of the most significant composers of the Romantic age, although some great pianists have dismissed his work as 'excessively ornamental and trivial'.

Chopin was born in a village called Żelazowa Wola, near Warsaw, Poland. He studied music in Warsaw before leaving the country aged 20 and heading to Paris.

Despite being a prodigy, Chopin gave very few public performances - only around 30. Instead, he made his living teaching piano lessons and selling his compositions.

He is credited with inventing the instrumental ballade and made major innovations to the piano sonata, mazurka, waltz, nocturne, polonaise, étude, impromptu, scherzo and prélude.

Aside from the piano, the main love of his life was French writer Amantine Dupin, who wrote under the pen name George Sand, with whom he had a relationship between 1837-1847.

Chopin was always plagued with ill health and died aged just 39 in 1849.

Europeana holds a treasure trove of Chopin-related material, including recordings of his work and music manuscripts, many of them handwritten.

This one bears his name and his notes in the margin. It's a sonata for piano and cello (opus  65), and you can find a recording of it on Europeana. This is the last opus number that Chopin himself used.

On his deathbed, he requested that all remaining unpublished works be destroyed. Contrary to his wishes, his family published further works after his death as op. 66-74. 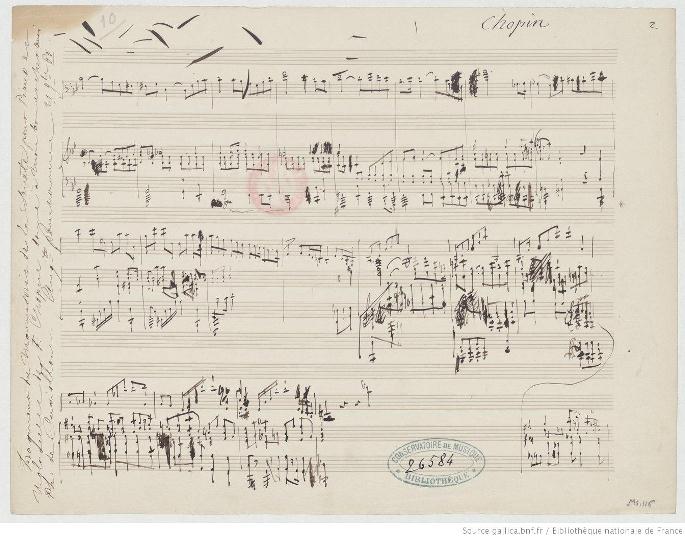 Here is another handwritten manuscript, this time of Chopin's famous 'Minute Waltz', or ' Waltz in D-flat major, Op. 64, No. 1'.

It is often thought that Chopin intended the waltz to be played in under a minute, but this is not the case. The emphasis is on the second syllable of the word 'minute', not the first, and so means 'small'.

Most performances of the waltz take between one-and-a-half to two-and-a-half minutes, although some pianists still take on the challenge of playing it super fast within 60 seconds - to do that they need to play at a rate of 420 quavers (quarter notes) per minute, or 7 per second. You can find a recording of the Minute Waltz on Europeana.