What did Columbus see off the coast of Africa?

On 9 January 1493, Christopher Columbus observed something remarkable off the coast of Africa... mermaids.

In his journal he described the encounter with three mermaids that elevated themselves above the suface of the sea. Most likely mistaking manatees, aquatic mammals also known as sea cows, for mermaids, "Columbus, disposed to give a wonderful character to everything in this New World, had identified these misshapen animals with the sirens of ancient story", explained historian Washington Irving.

Columbus also added that the mermaids were by no means as beautiful as depicted in folk tales. Indeed, mermaids have been traditionally known as creatures of divine beauty. Across the globe, from generation to generation, legends have been told about the mesmerising voices of mermaids that bewitched sailors to join the underwater world.

Here are some of the examples of how mermaids have been depicted in different countries: 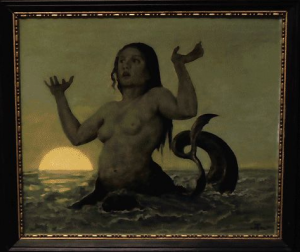