Books were expensive in Scotland between the 17th and 19th centuries. But literacy was comparatively high, and people were keen on reading. There was a large market for cheap, easy-to-get reading material: so-called street literature because it was simply sold on the streets. 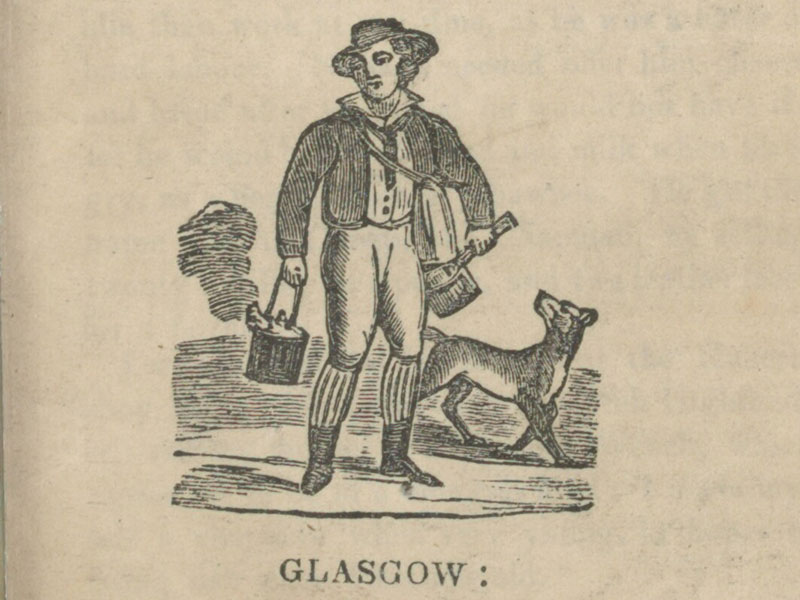 A popular type of street literature was chapbooks: small booklets of 8, 16 or 24 (and sometimes more) pages, poorly printed on thin paper, covered with a paper wrapper and often adorned by crude woodcuts. They sold for a penny apiece.

Chapbooks contained songs, tales, children’s stories, history and news and formed the staple reading diet of the lower classes. Chapbooks were sold by street criers, hawkers and itinerant pedlars, or chapmen. People also bought them at fairs, from the printers’ shops, in pubs and even toy shops.

For a penny, people could read the last words of an executed criminal, an account of a recent disaster, a garland of songs, or the history of famous heroes like William Wallace, Rob Roy, Nelson or Napoleon.

Chapbooks were rarely read in silence. More often than not, they were read or sung aloud to an audience, which often included those who were illiterate.

The earliest Scottish chapbook was printed in Edinburgh in 1682. It is a verse edition of the popular folk tale of Tom Thumb, the little hero from the time of King Arthur. The 18th century saw a large increase in the publication of chapbooks. Tom Thumb reappears alongside religious exhortation and humour:

The woodcuts used for illustrations were often generic and only loosely related to the topic of the chapbook, and sometimes not at all.

For instance, the following account of natural disasters like avalanches and sandstorms includes a woodcut of a kilted Scotsman in front of a horse and cart with no snow or sand in sight:

A story about the adventures of four Russian sailors has a fitting woodcut of a sailing ship:

Particularly interesting are several editions of ‘Factor’s garland’, a story about the adventures of a young man who rescues a damsel in distress, is thrown overboard a ship, rescued, and finally marries the princess. The first three woodcuts below appear in chapbooks that were produced by the same printer: John Morren (Edinburgh).

Chapbooks in Scotland were not only published in English. Lowland Scots, the vernacular language of the common people, appeared mainly in the form of proverbs or songs. There are also a very small number of chapbooks in Gaelic, all of them containing popular songs:

In the 19th century, chapbooks slowly made way for newspapers, penny dreadfuls and periodicals. These were produced to a higher standard and appealed to the more discerning readers, also of the lower classes.