Astronomy in all its forms

Beginning his career by claiming that there is life on other planets, Camille Flammarion had by the end of the 19th century become one of the most famous astronomers on the planet! Passionate about astronomy, he contributed to making this field accessible to all. 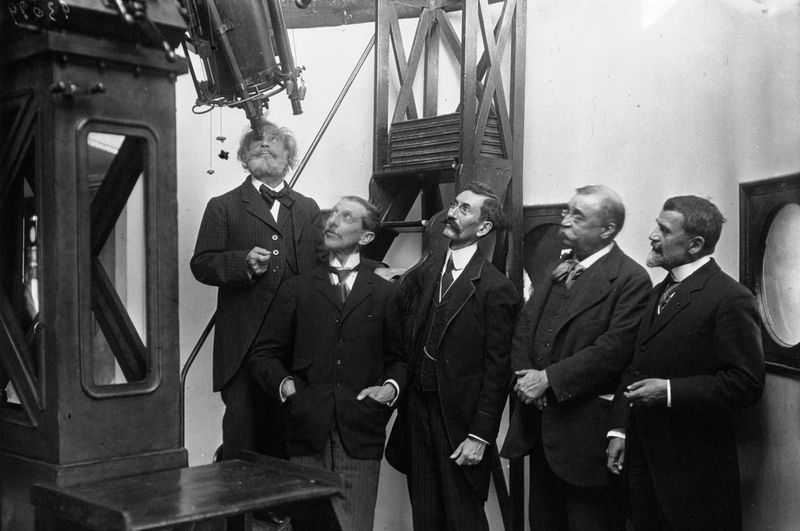 Nicolas Camille Flammarion (1842-1925) came to Paris in 1856 as an apprentice engraver and took evening classes, particularly at the Association polytechnique. He then joined the Paris Observatory's calculation centre as a "student astronomer". But in 1862, his first book, 'La Pluralité des mondes habités' ('The Plurality of Inhabited Worlds'), caused a scandal. In this book, Flammarion supports the theory that other planets might be inhabited. This theory had, through the previous centuries, had such prestigious defenders as Kepler, Galileo and Descartes! Flammarion left the Observatory immediately after, but his career in popular science had been launched.

His books were very successful: 'Astronomie populaire' ('Popular Astronomy'), published in 1880, received an award from the Académie française and had sold 100,000 copies by 1900. Flammarion published his books with major publishing houses like Hachette and Hetzel, and of course with Marpon and Flammarion, founded by his brother Ernest.

Starting in 1865, he also taught classes and spoke at conferences, not only on astronomy but also on other subjects such as aeronautics. His activities took him beyond Paris: as early as 1868 he spoke at conferences in Belgium and also in Italy. In 1875, he travelled all across France on a grand tour, speaking in Burgundy, Auvergne, Brittany and Normandy.

Above all subjects, it was the planet Mars that most fascinated Flammarion. In 1876 he drew a map of the planet, taking into account his observations and those of all his predecessors since the 17th century. At the same time, the Italian astronomer Giovanni Schiaparelli claimed to have observed a network of canals on the surface of Mars. In the controversy over these Martian canals, Flammarion chose to defend their existence. These canals confirmed his theory that life was possible on Mars, even though he admitted that he had never observed them himself. In 1892, he published a book devoted entirely to Mars: 'La Planète Mars et ses conditions d'habitabilité'.

Astronomy is also very present in Flammarion's science fiction novels, 'Urania' and 'Stella', but his interest went beyond books. He wished to set up a private observatory in Paris! So he installed a dome and a refracting telescope on a property in Juvisy-sur-Orge that had been given to him in 1882 by Louis-Eugène Méret, an admirer and amateur astronomer. On 28 January 1887, he founded the Société astronomique de France (Astronomical Society of France) and became its president.