Carnival traditions which banish winter and welcome spring can be found across Europe. Hungary’s oldest and most famous, 'Busó-walking' in Mohács starts today, with around 1000 people taking part. 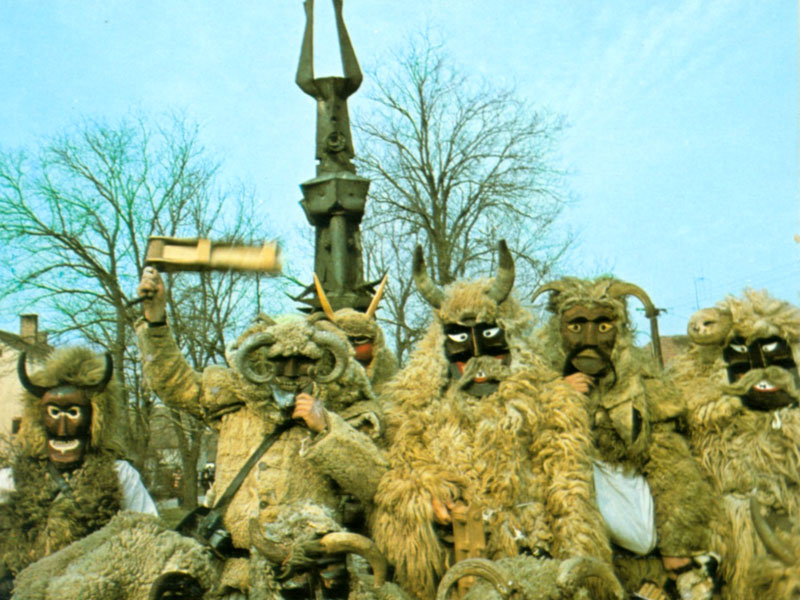 'Busó-walking', a world-famous folk tradition of the Šokac population in Mohács, a town in southern Hungary, was first recorded at the end of the 18th century.

According to the legend, the native Šokac people had escaped from Mohács town to the moorland of Mohács Island to avoid Ottoman troops. Returning to the town at night, they crossed the Danube in boat, and, dressed in terrifying masks and making noise with instruments, they drove the Ottoman troops from the town.

There is probably little truth in the story - Mohács was liberated from the Ottoman rule in 1687, and the migration of the Šokci started about ten years afterwards. Presumably, the Balkan Šokci brought this tradition, which was further formed in Mohács to today’s celebration.

In the parade, busós are men wearing carved wooden masks, moccasins, white linen trousers stuffed with straw, sheepskin coats with their fur outside, tied at the waist by a rope or chain, on which sheep bells hang.

They carry bags on their shoulders, and hold rattles or wooden maces in their hands. Other objects found in the carnival are decorated weights (praćak), water carriers (obramenica) and a Busó puppet which is carried in a wooden tub.

The most important element of the Busó costume is a wooden mask with sheepskin hood, carved from willow and traditionally painted with animal blood. The 'pretty Busós' are girls and boys dressed in Šokac folk wear and their faces are veiled.

Another costumed figure, jankeles are boys dressed in ragged clothes, who cover their faces with rags or stockings and carry bags stuffed with ash, flour or rags. They hit spectators – mainly girls – with the bags.

In Mohács, veiled women and men in nuptial clothes and other people in carnival dresses are called 'maskara' (masqueraders).

Busó-walking (also called 'poklade') has today lost many of the original traditions, but has gained a lot of spectacle for tourists to enjoy.

Spectators should know that the usual moral rules do not apply to Busós, Jankeles and masqueraders during the carnival procession. During the event, there is a special 'suspended' state, often especially at girls’ and women’s expense.

The modern Busó-walking starts on the square that was named after Kóló, the Šokac dance. The disguised Busós, Jankeles and masqueraders gather here and meet other Busó groups, who have crossed over the Danube by boats. When the ancient cannon fires, the different groups walk into the main square of Mohács through the main street, where the carnival begins.

After this, a noisy carnival is celebrated on the bank of the Danube and in the neighbouring streets. At dusk, the groups return to the main square, dance around a huge bonfire and the streets clamour with people.

On the closing day of the carnival – on Shrove Tuesday – the people of Mohács burn a coffin representing winter on a bonfire on the main square. By dancing around the fire, they say goodbye to winter and welcome spring.

EXPLORE MORE: Carnival traditions from across Europe in the chapter 'Feast and Fast' in our exhibition Celebrations in Europe

Tourists visiting Mohács at other times of the year do not have to miss the experience of Busó-walking, because a cultural centre, Busóudvar, was opened a few years ago.

The museum introduces visitors to the centuries-old carnival tradition, giving a taste of its unique atmosphere and an insight into the local craftsmen’s activities related to the event.

In 2009, the UNESCO added Busó-walking of Mohács to the Representative List of Intangible Cultural Heritage of Humanity, the first from Hungary. In 2012, the Committee for Hungarikums designated the tradition as having national value.