A journey through Byzantine Ravenna

One of Europe’s most important Byzantine cities

Ravenna in modern Italy was one of Europe’s most important cities in the Byzantine era. Today, experts from the** Byzantine Art and Archaeology project take us on a tour of Ravenna’s remarkable Byzantine heritage. 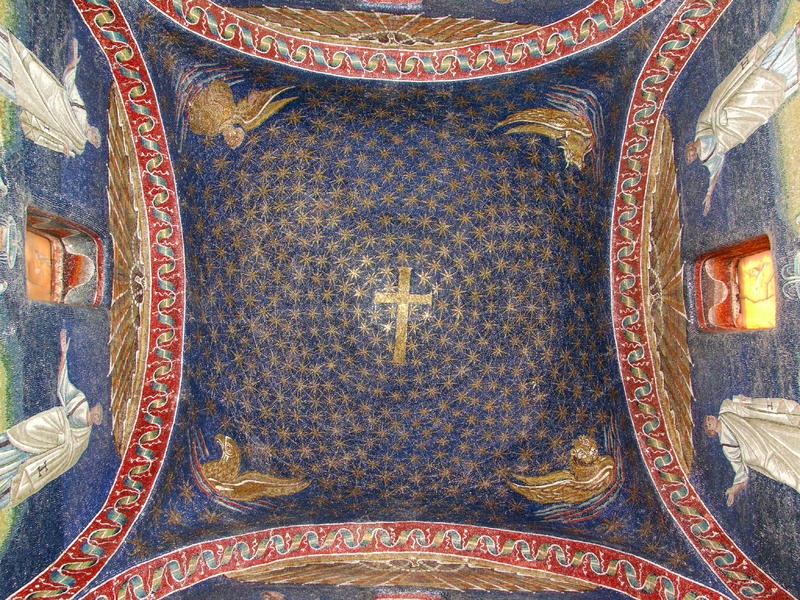 In 1996, UNESCO added eight early Christian monuments in Ravenna to its World Heritage List. Ravenna was one of Europe’s most important cities in the Late Antique period. Between 402 - 751 CE it was the residence of the Western Roman emperors, of the Ostrogothic kings of Italy and of the Byzantine governors. During this period the city was progressively enlarged and enriched by remarkable works of art and architecture, some of which still preserved today. Ravenna became a link between the Eastern and the Western Roman Empires.

The extraordinary flourishing of mosaic art in Ravenna between the 5th and the 6th centuries CE – the golden age of the city – has left us a great number of examples from the early period of Byzantine art. As with Thessaloniki, Constantinople, Rome and Milan, mosaic became the main medium of expressing civic prestige, both as a court residence and as a prominent ecclesiastical centre. Let's explore some of Ravenna's most important Byzantine monuments.

The Neonian Baptistery was built at the beginning of the 5th century CE and thoroughly refurbished and decorated by the Bishop Neon in the years 458-460. Its interior is decorated by mosaics and stuccoes depicting prophets, the apostles and other motives alluding to the heavenly city and to the Second Coming of Jesus Christ.

The Mausolueum of Galla Placidia

Galla Placidia, daughter of the Roman Emperor Theodosius I (379-395) was regent to her son Valentinian III (423-437) and a major force in Roman politics for most of her life. Her mausoleum was built around 425-450 but it was never used for her since the empress died and was buried in the year 450 in Rome.

The mausoleum’s interior is entirely covered with Christian symbols of immortality and eternal life: for instance, the cross is used for the plan of the building itself and for various parts of the ceiling’s mosaic decoration:

Built in the first half of the 6th century CE, during the reign of the king Theoderic, of Arian beliefs, the Arian Baptistery was connected to the Arian episcopal church.

Its dome features a mosaic depicting the baptism of Christ in the river Jordan, surrounded by the twelve Apostles who pay homage to the Holy Cross covered by a purple shroud – a symbol of the Passion and of the physical nature of Jesus (a central belief in the Arian faith). On the external circular band the procession of the Apostles is depicted, led in separate directions and meeting at the empty throne (the Etimasia):

The Basilica of Sant’Apollinare Nuovo

The Basilica of Sant’Apollinare Nuovo (first quarter of the 6th century CE) was the king Theoderic’s Palatine church. The glory and power of the Gothic king was represented in the panels depicting the Palatium, the royal court, the city of Ravenna and the post of Classe:

Under Justinianic rule, the mosaics were modified by removing the figures connected to Theoderic and by incorporating them into the Catholic tradition with triumphal processions of saints, virgins, the Virgin Mary and Jesus Christ.

The Basilica of Sant’Apollinare

The Basilica of San Vitale

The construction of the Basilica of San Vitale (built 527-548) shows as important influence of the Eastern Mediterranean art, both in the church structure (a central octagonal plan surmounted by a large dome) and in the iconography of the mosaics.

The mosaic decorations from the Basilica of San Vitale presbytery include the following personages [l-r]: 1. Bishop Maximinian and Giuliano Argentario, 2. detail of the Empress Theodora, 3. detail of the Emperor Justinian:

Images are from the archives of the Museum of the City of Ravenna – Classense Library (Ravenna), who is proud partner of BYZART - Byzantine Art and Archaeology on Europeana project (co-financed by the EU – CEF)._